You've found this old page through google or another search engine, Please Click here for our 2021 WEBSITE

Please ring for further details of projects we have performed 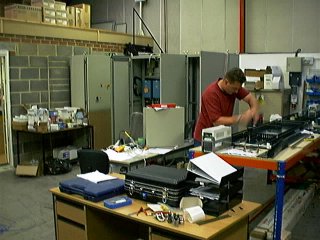 PLC Programming in Plymouth for an automation company. This is maintaining a large number of PLCs, including Siemens, Rockwell, and several others. Siemens Classic and Siemens TIA are currently being installed on several new projects for controlling and maintaining temperature for a manufacturing process.

Replacement of several obsolete Overseer Systems Ltd HMIs with Siemens and Allen Bradley PLCs and HMIs. The Overseer unit was controlling the line and we had to analyse the control system's method of production (since no control logic was available) to replace this Overseer HMI with a new maintainable unit within 5 working days of the total system failure of the Overseer unit.

This system was a weighing and blending control system making adhesive paste to fixed recipes. The new system had additional recipes and control actions plus better reliability over the old Overseer Systems Ltd control HMI..

We have also replaced other Promtek StoraWeigh weighing and blending control system units in the past such as the SW9000 and SW500 systems.

The replacement system was in production the day after it was installed.